Sri Lanka's wildlife authorities said Tuesday that a pair of twin baby elephants were born first time at the Pinnawala Elephant Orphanage outside the central hills of Kandy in the Central Province.

A spokesman from the orphanage said the twin elephants were born to a female elephant named "Surangi," local media reported. Both the baby elephants were males.

They are the first elephant twins born in captivity in Sri Lanka since 1941, according to elephant expert Jayantha Jayewardene.

“Both the calves and the mother are doing fine,” Renuka Bandaranaike, head of the Pinnawala Elephant Orphanage, told reporters.

“The babies are relatively small, but they are healthy.” 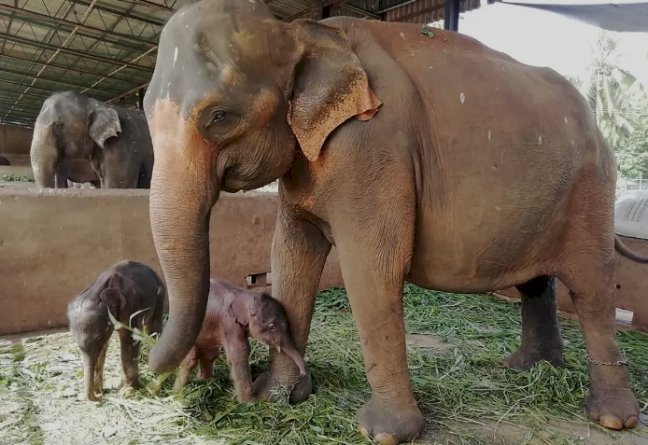 25-year-old named Surangi delivered healthy male calves. She also gave birth to a male calf in 2009 and this was her second time around. The father, 17-year-old Pandu, is also one of 81 residents at the orphanage, which was set up in 1975 to care for destitute wild elephants.

The facility, a key tourist attraction, has been closed to visitors because of coronavirus restrictions.

Last year, wildlife officials said the first known twins born in the wild in Sri Lanka had been spotted at the Minneriya sanctuary in the east of the island.

A 55-year-old who died of coronavirus is being remembered as a loving family man and dedicated frontline healthcare worker. Sumith Premac .... >>

State government deals with foreign countries like Victoria's controversial agreement with China could face cancellation under a new Mor .... >>

COVID-19 variants to be named after constellations...

Three weeks after it outlined its much-publicised road map for living with COVID-19, Singapore is returning to the lockdown-like conditions, .... >>

Greens Senator Mehreen Faruqi has written to the Federal Government to urge them to immediately extend income support to international stude .... >>

Sri Lanka wins Another medal at Tokyo Paralympics as Dulan...

Record cases for NSW as Victoria ends its lockdown