The detection of  296 new COVID-19 cases on Friday (July10) set alarm bells among the health authorities in Sri Lanka  as they warned public not to drop guard against the possible community spread by sticking to health guidelines. 296 new cases of coronavirus is the highest reported in the country.

Officials on Friday said 252 COVID-19 positive cases were found at the drug rehabilitation centre at Kandakadu in the north central region of Polonnaruwa.

Nalaka Kaluwewa, Director General of the Department of Government Information, in a press release said a total of 338 inmates and staff in the drug rehabilitation centre were tested for the coronavirus.

The centre will now be converted into a COVID-19 hospital, officials said.

Sudath Samaraweerra, chief epidemiologist, said the new cluster was detected after tracing the history of a patient of the centre who was also an inmate of the Welikada prison here. 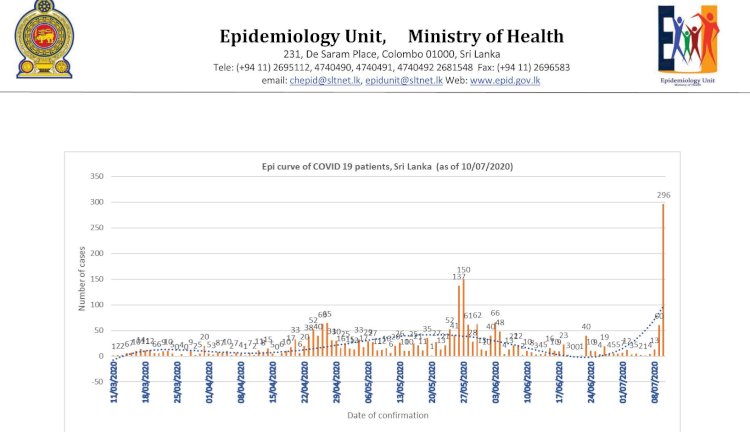 Army Commander Lt General Shavendra Silva said the investigation as to how inmates of the facility in Kandakadu in the Polonnaruwa district became infected is underway.

Silva, who is heading the country’s National Operations Center for Prevention of COVID 19, said it is “possible that we find more cases in the Kandakadu facility.”

“On June 7, we found this infected person and carried out testing of all inmates and officials at Welikada prison. They were found negative for testing,” Silva said.

He said it was possible that he was infected from others on drug rehabilitation or he may also have got it from Sri Lankan migrant workers who were repatriated by the government recently.

Some drug addicts, who were transferred to Sri Lanka from jails in the middle eastern nations when workers were repatriated, were sent for rehabilitation at Kandakadu.

Among others who tested positive is a woman counsellor from the drug centre and her contact tracing in the north western region of Puttalam has led to many people being put under self quarantine, Silva said, adding that she was on leave when she was tested positive.

On Tuesday, prison officials barred family visits at all jails, triggering demonstrations outside the Welikada jail in protest of the decision.

In April, a drug addict had caused the biggest cluster of COVID-19 cases. Navy personnel at Welisara Naval base north of Colombo were infected as they apprehended the drug addict to quarantine him.

Over 900 Naval personnel and their close family members were infected by the virus.

The facility was re-opened last month after breaking the spike in cases, health officials said.

The 252 cases at Kandakadu is the highest number of infections since June 3, when 66 COVID-19 positive patients were detected.

Up until the cluster at Kandakadu, most of COVID-19 positive cases have come from the Naval base at Welisara and from the expatriate labour force returning from West Asia and Europe.

Cap on international arrivals and travellers to pay for mandatory hotel quarantine...

Bringing down the “AVIGAN” drug to Sri Lanka is a hot topic on social media and News media in Sri Lanka.   Mr Chandana W .... >>

WHO acknowledged airborne transmission of Corona...

The World Health Organization finally acknowledged possible airborne transmission of the coronavirus, at a virtual press conference in Genev .... >>

Victorian Premier Daniel Andrews said on Saturday (11) that the state had now recorded 3560 cases of coronavirus as the state recorded 216 n .... >>

If you have been to any of these locations during the time and date indicated you should immediately self-isolate until 14 days after you we .... >>

Melbourne's lockdown extended for another week