According to a report publlished by the CMA Australia, Sri Lanka and Australia among the top 10 countries managed Covid-19 crisis well. New Zealand no 1 country and Australia and Sri Lanka ranked No 4 an 9 respectively.

Folowing is an extract of the report  published by the CMA Australia.

Never has good leadership been more critical and relevant in our lifetime than today as countries around the world struggle to fight the COVID-19 crisis. In times of crisis, good leaders rally to nurture and protect their flock.  Great Leaders with vision go beyond their own national boundaries and unite the world fostering global partnerships to work towards the common good.  However, as we struggle against an unprecedented pandemic sweeping through our world, our leaders are tackling this global crisis in very different and often controversial ways. The nature of this crisis demands global cooperation but requires action differing from nation to nation. Each country battling this crisis has very unique political, cultural, geographical and social dimensions.

First, let us look at the leadership in the ICMA’s home country of Australia. Prime Minister Scott Morrison has emerged as a very capable leader and displayed remarkable leadership qualities in this crisis. The year 2020 had not begun well for Australia with horrific bushfires and our national leadership (particularly the Prime Minister) coming under severe criticism. Just one month later, in a dramatic turnaround, much to his credit, the very same Prime Minister Scott Morrison significantly picked up his game and upped the ante showing outstanding leadership during the COVID-19 crisis.  To start with, he created a national cabinet as a unique decision-making authority bringing together State Premiers of different political persuasions to work together on a common goal to overcome the crisis. He has also successfully overcome ideological differences with his opponents (in stark contrast to President Trump in USA); earning him the admiration of supporters and opponents alike. The result of this coordinated and carefully planned response to the pandemic is a dramatic downward trend in the number of new cases as well as active cases as illustrated in the attached diagrams from ‘worldometers’– Similar diagrams for every country are available and regularly updated on the ‘worldometers’ website.

Besides the Australian Prime Minister, the Premier of Victoria, Daniel Andrews has also emerged as a great leader. He led the state admirably during the bushfires and now the Pandemic. Other State Premiers have also cooperated well with the Federal government while taking appropriate statewide action.  Maybe there is a lesson for the USA to learn from here? A lesson that political differences need to be set aside and cooperation at all levels, State as well as Federal, together with a well thought-out and executed strategy, is the key to effective control of the Pandemic and any future crisis – global or national.

Great Leadership is different from populism – The Indian Prime Minister like many other leaders around the world is arguably a populist. This is evident from some of his popular actions like getting all Indians to clap hands at the same time and on another occasion getting everyone to turn the lights out and light candles ‘diyas’ for 9 minutes at 9pm. Popularity and populism will not win the battle against the Pandemic. The true test of his leadership will be how well he manages the fallout from this pandemic, irrespective of his popularity.

In India, the first COVID-19 infection was reported in Kerala on January 20. From early March, the virus started to spread across India; currently, 30 out of the country’s 36 States and Union Territories (UTs) are affected. The government’s failure to detect, trace and isolate infected persons in the nearly two-month-long window of opportunity it had to protect people from the coronavirus shows its irresponsible handling of the COVID-19 crisis (according to James Wilson – Test not find not – Frontline April 10, 2020)

Consider India’s leadership response to that of neighbouring Sri Lanka. As the origin of the novel coronavirus in Wuhan was announced, Sri Lankan authorities started to take vigilance in stopping the potential danger. The military forces and the national intelligence service were put on high alert. The government created specialized aviation and border control expert teams, to track the movement of all inbound tourists and with a potential threat. Sri Lanka was one of the first countries to send rescue missions to Wuhan to evacuate 33 Sri Lankan families. The families were brought down via an exclusive carrier and quarantined in a unique quarantine military facility. All potential contacts were observed continuously under quarantine. Those in the military facility were given full access to information; and there was no government control of information, hence increasing its reliability.

This explains why although Sri Lanka is placed a lowly 93rd in the CPI ranks; it is ranked 10th on the GRIDTM Index alongside countries such as Hong Kong and Taiwan.

The reason Sri Lanka responded so well is because Sri Lanka has a public health system which is free for all citizens. Going hand in hand, Sri Lanka has had a free education system until graduate school for the last 60 years; thanks to which it has trained thousands of well-qualified healthcare professionals and paramedical workforce for many decades through well-regulated and state of the art medical faculties covering all regions of the country; all free of charge. The doctors and paramedical staff receive post-graduate training and continuous medical education throughout their career. The island nation also has a robust century-old community health program. Health statistics such as maternal and child mortality rates are the lowest in the region. In fact, comparable to the western world. The life expectancy is highest in the region. The nation is 100% vaccination covered, and all treatments under the extended program of immunization are administered free of charge.

“For most of us born post World War II, this is the biggest unprecedented crisis our world has faced in our life time. Our leaders will be judged by their performance during the course of this crisis. Some leaders have already failed their constituents and other leaders have stepped up to the plate. In this ongoing Pandemic and the biggest crisis of our lives, the requirement for good leadership has never been greater. Leaders who show genuine empathy and efficiently take care for the citizens of their country will be remembered and those who fail the test with misguided agendas and mediocre leadership will be judged harshly by history” CMA concluded its report. 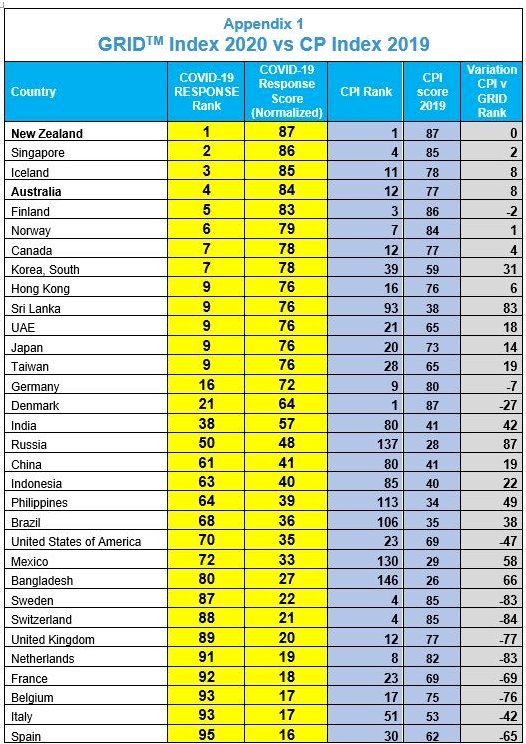 - Above Article is based on report published by CMA Australia on 14/5/20 - GRID Index: Tracking the Global Leadership Response in the COVID-1Crisis

Current restrictions to remain in place for at least four weeks

As global cases soared past 2.5 million, the race is on to develop a vaccine to help contain the spread of Corona Virus. There .... >>

New South Wales Premier Gladys Berejiklian has pleaded with residents to follow the rules or risk another lockdown following daily rises in .... >>

Sri Lanka’s economy is among the worst affected...

Sri Lanka’s economy is among the worst affected by the current COVID 19 crisis, according to a ranking published by the Economist this .... >>

The NSW Government has announced $20 million...

The NSW Government has announced it will fund temporary crisis accommodation for stranded international students. The $20 million package .... >>

The Australian Defence Force and other states have been called in to help Victoria’s efforts to contain coronavirus cases according to .... >>

Melbourne’s Holiday Inn cluster grew to 11 amid some states...

Sri Lanka ranked second in the successful fight against...

Australia close the borders for all non residents and citizens...

UK coronavirus home testing to be made available 'within...