A tsunami warning has been issued for parts of NSW, Victoria, Queensland and Tasmania following the eruption of an underwater volcano. The Bureau of Meteorology (BOM) has issued marine warnings for coastal areas across eastern Australia, including parts of Queensland, New South Wales, Victoria and Tasmania at 9:19 pm AEDT on Saturday. 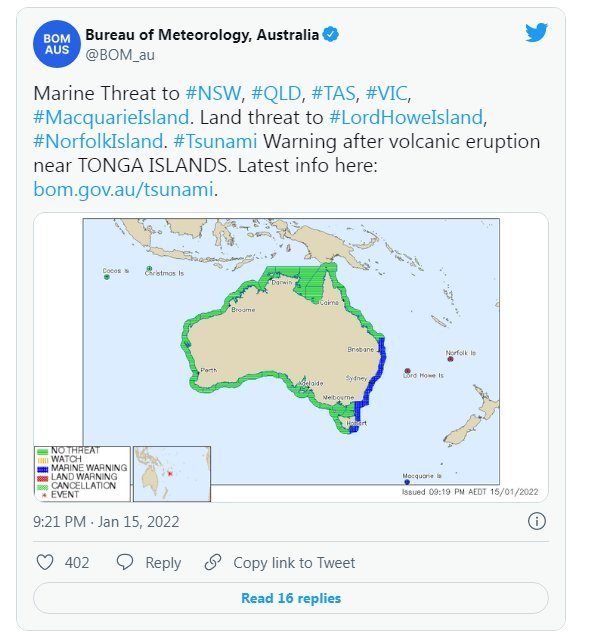 A tsunami warning has been issued along parts of Australia’s east coast after the eruption of an underwater volcano near Tonga.

There are land warnings for Norfolk Island and Lord Howe Island.

In Victoria, a marine warning is in place for Lakes Entrance to 60nm east of Gabo Island including East Gippsland Coast. A warning is also in place for Macquarie Island.

“People in areas with threat of land inundation and flooding are strongly advised by emergency authorities to go to higher ground or at least 1 kilometre inland,” the warning states.

“In areas with a threat to the marine environment only, emergency authorities advise people to get out of the water and move away from the immediate water’s edge of harbours, coastal estuaries, rock platforms and beaches.”

Current restrictions to remain in place for at...

Prime Minister Scott Morrison said on Thursday lockdown restrictions could be rolled back in a month, depending on three key improvements in .... >>

RANIL SWORN IN AS PM

Five-time former Sri Lankan Prime Minister Ranil Wickremesinghe has been reappointed for a sixth time in an effort to bring stability to the .... >>

Sydney locked down for two weeks

Stay at home orders extended to all of Greater Sydney, Blue Mountains, Central Coast and Wollongong Millions of NSW residents will go int .... >>

The Civil Aviation Administration of China (CAAC) has temporarily suspended flights from the United Arab Emirates (UAE), the Philippines and .... >>

Four cases of the coronavirus have been confirmed on Saturday, one in Victoria and three in NSW. Victorian health authorities confirmed t .... >>

NSW posts its deadliest day as cases surge in Victoria

Australians to get Covid-19 booster shot one month earlier...