Victoria has rocked by three earthquakes this morning (22) with tremors felt across the state, New South Wales, Canberra and as far as Adelaide and Launceston.

Residents reporting strong shudders and offices being evacuated. It has led to significant property damage, particularly in Melbourne. However  there have been no reports of death or injury so far.

The Bureau of Meteorology says there is no tsunami threat to Australia.

The State Emergency Service has received reports of building damage across Melbourne and more than 1000 homes across the state are without power, about 170 of them around the Melbourne suburb of Windsor.

Geoscience Australia said there was a magnitude 6 later downgraded to magnitude 5.8 earthquake that was 10km deep occurred with an epicentre near Mansfield in Victoria. Mansfield is a small town in the foothills of the Victorian Alps. It is about 180km north-east of Melbourne by road. 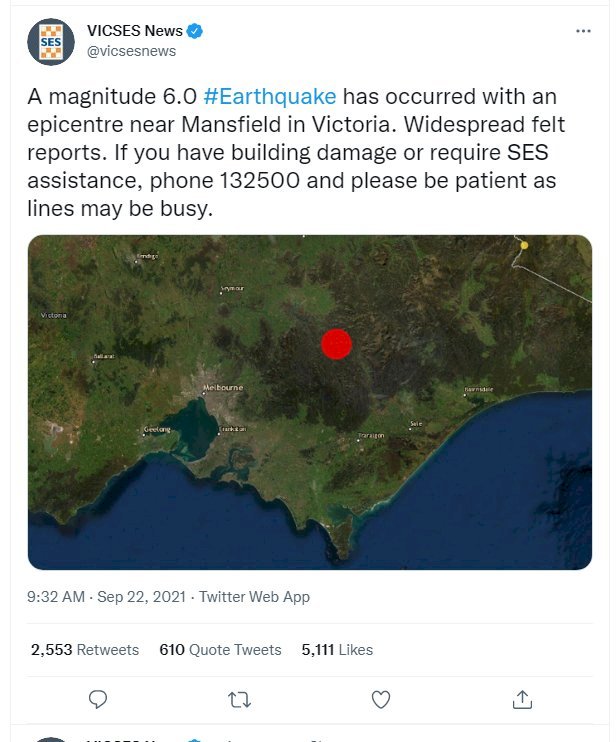 According to Geoscience Australia the first quake was at 9.15am local time, and the second at 9.33am.

Fortunately the 5.8 magnitude earthquake does not appear to have damaged the underground gold mines at Woods Point, which was just a few kilometres from the epicentre.

Prime Minister Scott Morrison, who is in Washington for high level regional security talks, said the federal government would provide the “necessary support” for Victoria.

“They are very rare events in Australia and, as a result, I’m sure people would have been quite distressed and disturbed by that, especially in the immediate area affected,”

“I’m pleased that reports so far that I've received are not of serious injuries and things of that nature. That’s very welcome news,” he said.

“Our thoughts are with everybody who's been impacted by that earthquake in Victoria, and we know that people in NSW have even felt the tremors,” she said.

“So our thoughts of everybody and we’ve had everybody stay safe and accountable during this very difficult time.”

Seismologists have warned that aftershocks are likely already occurring and there is a small likelihood that there could be a larger event today.

“Geoscience have confirmed there is a possibility that we may receive further aftershocks and potential risk of further earthquakes,” he said in a press conference. “Indeed, more aftershocks could occur for weeks, if not months.”

Australia to reopen international borders by Christmas 'at the latest'

Four cases of the coronavirus have been confirmed on Saturday, one in Victoria and three in NSW. Victorian health authorities confirmed t .... >>

Sri Lanka recorded the highest single-day spike in coronavirus cases on Tuesday as 422 more persons were tested positive for the virus, .... >>

Eight die in prison riot over Covid panic in...

The Sri Lankan government on Monday ordered a thorough probe into a riot by inmates over rising coronavirus infections at a prison outside t .... >>

Police have charged an organised group of seven men and women accused of pickpocketing people catching public transport and in shopping prec .... >>

Dinesh won the Gold for Sri Lanka at Tokyo Paralympics