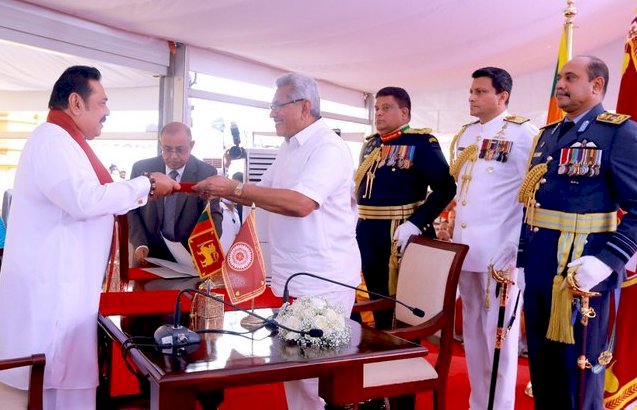 Sri Lanka’s Former President and Prime Minister Mahinda Rajapaksa was sworn in on Sunday morning at the auspicious time as the Prime Minister of Sri Lanka’s 9th Parliament before the President Gotabaya Rajapaksa amidst Pirith Chanting and blessings by the Maha Sangha at Kelaniya Raja Maha Vihara,  a historic Buddhist Temple in Sri Lanka.

Mahinda Rajapaksa, who contested the General Election 2020 from Kurunegala, topped the preferential votes at the district level as well as at national level by clinching a whopping 527,364 votes

The swearing-in ceremony of the new Premier was attended by the members of the clergy, former president and newly elected MP Maithripala Sirisena, the Governors, First Lady Ayoma Rajapaksa, Mrs. Shiranthi Rajapaksa and family members of Prime Minister Rajapaksa, Commanders of the Tri-forces, newly elected members of parliament, envoys of foreign mission and other distinguished guests.

“I am humbled by the opportunity given to me to serve my people again,”     he wrote on Twitter.

“The trust that Sri Lankans afford me, inspires me to continue serving my nation. President Gotabaya Rajapaksa, the new Podujana Peramuna government and I will ensure that the country embarks on a progressive journey during our tenure.”

Mahinda Rajapaksa completed 50 years of parliamentary politics in July this year. He was elected as a Member of Parliament at the young age of 24 in 1970.

Victoria has recorded highest number of deaths overnight amid Seven arrested at...

Dr. Tedros Adhanom Ghebreyesus, the chief of the World Health Organisation (WHO) has gone into self-isolation, after coming in contact with .... >>

Moderna Inc.'s experimental vaccine was 94.5% effective in preventing COVID-19 based on interim data from a late-stage trial, the compan .... >>

Victoria has recorded 532 new cases of coronavirus in the past 24 hours and six more deaths. Premier Daniel Andrews has announced the g .... >>

The Royal Australian Navy ship HMAS Parramatta arrived today (07th March 2020) at the port of Colombo and she was welcomed by Sri Lanka Navy .... >>

Army to doorknock in Melbourne to help with contact tracing...