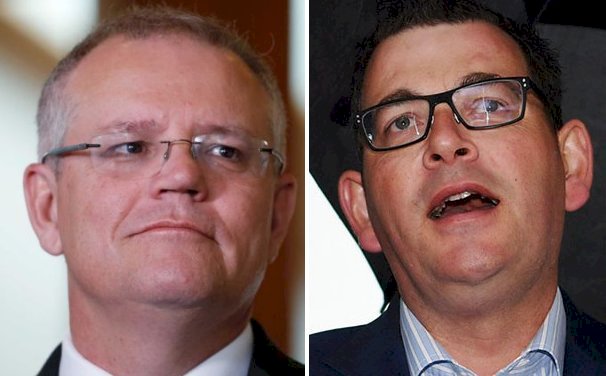 From midnight tommorow (Wednesday), most shops in Melbourne including department stores such as Kmart and Target will be shut down for six weeks – except for essential services such as supermarkets and pharmacies – in a move that is likely to trigger thousands of job losses and stand downs. Shutdown  will affect around 250,000 people, taking the total number of those already stood down or working from home to around one million.

Prime Minister Scott Morrison has announced a $1,500 "pandemic leave disaster payment" after Victorian Premier Daniel Andrews revealed which industries will be shut down as the state struggles to contain its coronavirus outbreak.

Infected people turning up to work has been blamed as a major factor in community transmission in Victoria.

"This pandemic is a disaster. And we need a disaster payment when it comes for people who have to isolate for a period of 14 days through no fault of their own, regardless of what job they're in or employment they're in — they need that support," Mr Morrison says.

From 11.59pm this Wednesday, retail will close, some manufacturing will close,’’ Victorian Premier Daniel Andrews said

“As heartbreaking as it is to close down places of employment, while I never thought that I would be telling people not to go to work, that is what we have to do in order to stop the spread of this wildly infectious virus, this deadly virus.

“We’ve got to make decisions, very difficult decisions but we got to earlier on the side of doing everything we possibly can to drive these case numbers down submit at the end of the six-week period.”

Victorian Premier Daniel Andrews is also announced new penalties for those who breach isolation rules. Mr Andrews said the fine for those who are not at home when they have been told to isolate will be an on the spot fine of $4,659. If people are guilty of repeat or serious breaches, that fine will be $20,000.

"From now, there will be no exercise if you supposed to be isolating at home. You will need to stay in your home or on your property.  Fresh air at the front door.  Fresh air in your frontyard or backyard or opening a window.

"If there were repeat breaches, if there were particularly selfish behaviour like, for instance, going to work when you had the virus, then there is the alternative pathway and that is, of course, taking you to the Magistrates Court, where the maximum penalty that can be applied to you is $20,000.

Victoria's Chief Health Officer Brett Sutton said while current measures weren't a "last resort", "there aren't really many other settings that you can go to".

​"The alternative is inconceivable.

"We need everyone to do what we're doing now to get to where we want to be."

Victoria is plunged into harsher restrictions this week in a desperate attempt to slow down the state’s coronavirus infections.  Premier Daniel Andrews declared a “state of disaster” that began at 6pm on Sunday, August 2, giving authorities sweeping powers, that includes a nightly curfew for Greater Melbourne from 8pm to 5am.

The NSW Government has announced $20 million...

The NSW Government has announced it will fund temporary crisis accommodation for stranded international students. The $20 million package .... >>