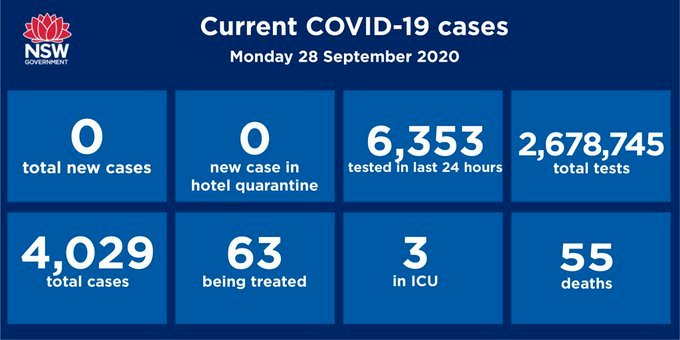 No new cases of COVID-19 were diagnosed in the 24 hours to 8pm last night, with the total number of cases in NSW remaining at 4,029.  This is the second day in a row that NSW has had no new cases, either locally acquired or in hotel quarantine.

Premier Gladys Berejiklian hailed the achieved but warned people not to be "lulled into a false sense of security" after the state recorded zero new coronavirus cases.

"I am worried about the lower rate of testing, yes it's the weekend and we expect a dip, but can I please encourage everybody to not to get complacent," Ms Berejiklian said.

Roughly twice the number of tests were carried out on Saturday, at 12,333.

"Yes it's the weekend and we expect a dip but can I please encourage everybody not to get complacent," she said.

Mr Berejiklian said NSW had done well because people had been careful and followed health warnings.

But she said that could change quickly as had been seen with Victoria's second wave.

NSW Health thanks the community for all they have done towards reducing COVID-19 numbers and continues to ask people to remain vigilant and come forward for testing immediately if symptoms like a runny nose, scratchy throat, cough or fever appear.

This is particularly important with the start of school holidays and increased movement of people around the state.

"With the start of school holidays and increased movement of people, NSW Health is appealing to everyone to get tested as soon as symptoms appear," NSW Health said in a statement.

It said testing numbers have declined in recent weeks and are urging people to come forward for testing right away if they have a runny nose or scratchy throat, cough, fever or other symptoms that could be COVID-19.

Locations linked to known cases, advice on testing and isolation, and areas identified for increased testing can be found here:

Sri Lanka ranked second in the successful fight against Covid -19

UK coronavirus home testing to be made available...

A CORONAVIRUS home test kit will be available "within days" - from Amazon and Boots, the UK Government has revealed. Thousands .... >>

NSW Health has issued a warning to the thousands of Australians waiting on COVID-19 test results after some residents were told they had to .... >>

21st March Another 51 people in Victoria have tested positive for coronavirus overnight and the state's total number of coronavirus c .... >>

Ten new cases of COVID-19 were diagnosed in the...

If you have been to any of these locations during the time and date indicated you should immediately self-isolate until 14 days after you we .... >>

Perth in lockdown as Delta variant confirmed in new community...