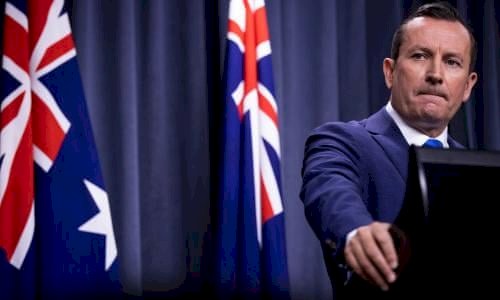 Perth has been plunged into a five-day lockdown after a hotel quarantine security guard contracted COVID-19 then went to a large number of locations in the community, not knowing he had it.

He said the male guard aged in his 20s had been working at Four Points by Sheraton in the CBD where there were four active cases, including two of the UK variant and one of the South African mutant strain.

The Maylands resident had tested negative on January 15, 17 and 23 but developed symptoms on Thursday, January 28.

Mr McGowan said it was suspected the man had the highly contagious UK variant as he had worked on the same floor as a case of that strain.

“Exactly how the infection was acquired remains under investigation,” the Premier said.

“We suspect he contracted the illness on the Tuesday or the Wednesday.

“We are advised that he may have been a driver for one of the rideshare companies.

“The last day he worked in the hotel was Wednesday, but we are advised, and this is being carefully followed up, that he did not do any other work in the time since.”

WA Health Minister Roger Cook said the man was potentially infectious while out in the community, listing multiple businesses in Maylands he had been to as well as the Perth Convention Centre.

“Something did go wrong and we do need to get to the bottom of it,” Mr Cook said.

“It is a serious situation and that is why we invite everyone to undertake the measures that we are all familiar with, that we undertook during March and April last year.

“For five days … just make sure that we take the opportunity to get on top of this situation.”

The man shares a unit with three other people who have so far returned negative results - but that will likely change.

“We put them into hotel quarantine, because the chances are they will subsequently term positive,” Mr McGowan said.

The lockdown applies to the Perth, Peel and South West regions and begins at 6pm WST on Sunday, running until 6pm on Friday.

Meanwhile WA is preparing for the election and there’s 41 days until the next election but the next five will be a campaign blackout for Premier Mark McGowan and the Labor and Liberal parties as Western Australia grapples with a short, sharp lockdown to prevent the spread of COVID-19.

Official campaigning was due to start from Wednesday when the government goes into caretaker mode but Mr McGowan said he would be on hand to deliver health information to the public rather than out on the hustings.

Death of the first Sri Lankan doctor due to COVID-19 amid Daily cases in Sri Lanka...

Actor-politician Ranjan Ramanayake, a Member of Parliament for the main Opposition Samagi Jana Balavegaya (SJB) has been sentenced to four-y .... >>

Premier Daniel Andrews said 671 new coronavirus cases had been detected since yesterday and seven more people had died. Six of the deaths ha .... >>

A coronavirus vaccine on track for the new year is rolling off the production line. US multinational pharmaceutical corporati .... >>

The Victorian Government has announced a $534 million support package for businesses impacted by the latest lockdown. The package include .... >>

Sri Lanka’s economy is among the worst affected...

Sri Lanka’s economy is among the worst affected by the current COVID 19 crisis, according to a ranking published by the Economist this .... >>

15 deaths amid a sharp drop in new cases in Victoria