FB is Adding Video Meetings Features as Zoom Stock is Falling on the News. 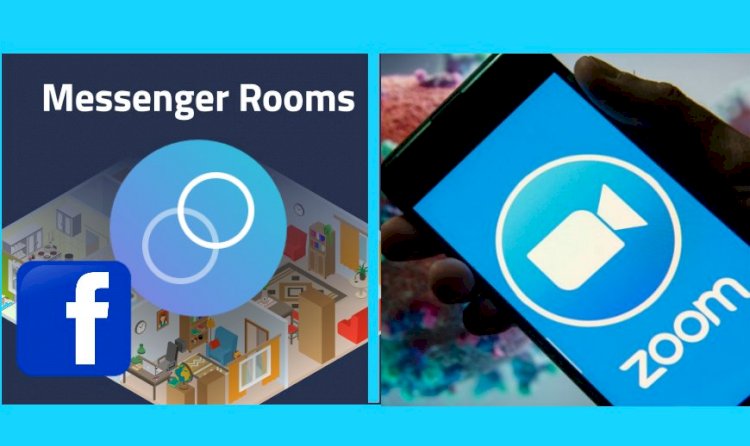 Social network giant Facebook Inc. is rolling out a new video-chat feature to rival Zoom, part of a suite of new offerings aimed at users kept home by the coronavirus.

Facebook  on Friday unveiled Facebook Messenger Rooms, a new feature that makes it possible for up to 50 people to meet together in a videoconference call for free with no time limits.

Facebook said Messenger Rooms can be joined from a phone or computer, without a separate software download. Rooms can be created from within the Facebook or Messenger apps. Invited users do not need Facebook accounts.

The Facebook Messenger Rooms service poses a new competitive challenge for ZOOM   which has seen its shares skyrocket on the rapid adoption of videoconferencing amid social distancing due to Corona Virus Pandamic.

Zoom has been on a tear since stay-at-home mandates were implemented in many countries to slow the Covid-19 pandemic. Zoom CEO Eric Yuan announced earlier this week that it had reached 300 million active users, Nearly 100 million new customers since beginning of April and The company reported about 10 million daily users in December. Zoom stock hit an all-time high on the news.

Zoom has experienced skyrocketing growth during the pandemic as it's been the preferred videoconferencing tool for a wide range of customers, including people, companies, and schools now operating on a work-from-home basis. That growth hasn't come without controversy; some have criticized Zoom for security vulnerability, and a number organizations have sworn off its tools.

However It has appointed former Facebook security chief Alex Stamos and a number of other experts to attack these concerns and security researchers say it has responded robustly to the issues. The company has committed to improving its security protocols and also gave an update on its 90-day security plan, saying it would release a new version of its software this weekend, Zoom 5.0, that would contain two new features to enhance security. First, it would enable AES 256-bit GCM encryption, which will improve meeting protection and add resistance to tampering. Second, users will be able to easily report any security violations to Zoom's Trust & Safety team.

The growth in daily users shows that Zoom's adoption has continued in spite of security concerns, and the 5.0 version should help assuage its critics.

However with the announcement of Facebook’s new service Massenger Room, Facebook stock climbed 2.7% to close at 190.07 on the Stick Market today.  Zoom stock dropped 6.1% to finish at 158.80.

Zoom, by contrast, allows up to 100 people to video chat for free, but with a 40-minute time limit.

Messenger Rooms is rolling out in some countries this week and will expand to the rest of the world in the coming weeks, Facebook said. The company did not provide any additional details on timing or which countries would be coming first.

Facebook is also expanding WhatsApp video and voice group calls to up to eight simultaneous users.

SriLankan Airlines extends temporary suspension until 15th of May

Sri Lankan Rupee Slide over 200 against US$ for...

Sri Lanka’s Rupee fell to its lowest close today surpassing Rs. 200 against the US dollar for the first time in history. The sellin .... >>

The Reserve Bank of Australia is warning a 40 per cent fall in house prices is 'plausible'  as coronavirus pushes up .... >>