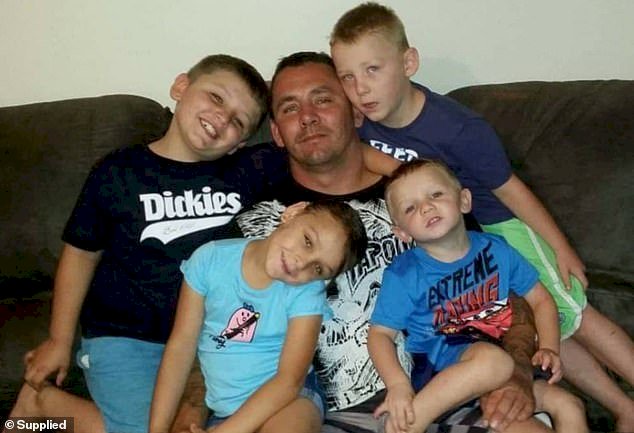 A Sydney father with terminal cancer has been asked to choose which of his children to see as only one of four will be able to cross the border to Queensland to visit their dying dad.

Brisbane truck driver Mark Keanes, 39, was diagnosed with stage four terminal cancer in his brain and lungs a month ago and is not expected to make it to Christmas.

The family of Mark Keanes have hit out at the outrageous Queensland government decision to allow only one of his four children into Queensland from Sydney to say their final goodbye.

Despite his family applying for an exemption to enter the state a month ago, Queensland Health have so far denied their request.

Mr Keans' loved ones have instead been forced to find other ways of getting into the Sunshine State - where the ailing Dad has chosen to die at home with the help of palliative chemotherapy to ease his suffering.

New South Wales Health has proposed allowing one of his children - all of whom are under the age of 13 - to see their father for a supervised one-hour visit before going back across the border.

But his sister Tam Langborne told Daily Mail Australia the family were at a loss deciding which of the kids would get to see their father in his final moments.

'The youngest of the children is only seven years old. I think sending him by himself to see his Dad for an hour would do a lot more damage than good,' she said.

“I understand the reasons behind the border closure but what hurts the most is actors and sporting teams get a free ride to go into Queensland because they have a name,” she said.

All we want to do is sit with our brother and say thanks for a good life and for the kids to see him for the last time.'

The Prime Minister Scott Morrison has been asked to intervene in the tragic case which has sparked outrage over coronavirus border closures in Queensland that have been the subject of pain for many families.

Their anguish comes as Premier Annastacia Palaszczuk cops fierce criticism for letting 400 AFL officials enter the state ahead of the Grand Final, while repeatedly knocking back everyday Australians with health or family reasons.

US movie star Tom Hanks will not have to undergo hotel quarantine after flying into Queensland from the US - with Ms Palaszczuk saying Hanks was exempt because of the industry's COVID-safe plan.

The issue was raised by Opposition leader Deb Frecklington in Queensland parliament, who said the family “may have had more luck if they were in the AFL or crew on a superyacht.”

NSW Health Minister Brad Hazzard also hit out at Queensland Premier Annastacia Palaszczuk on the subject of families being separated on either side of the border.

'I can only express my anger, my supreme anger, at the Queensland Premier’s decision which in my view broadly across the border currently is nothing more than base, loopy politics,' he said.

The Langborne family are not alone, with dozens more falling victim to Palaszczuk's hardline stance on her border.

Army to doorknock in Melbourne to help with contact...

The Government urges Sri Lankan expatriates who wish to return to Sri Lanka to safely remain where they are now until the risk of COVID&ndas .... >>

No kissing or hugging as Sri Lanka lifts weddings...

Sri Lanka has lifted a ban on wedding receptions as part of an easing of coronavirus restrictions, but greeting each other should be done wi .... >>

The government has moved to further restrict public gatherings of people from 10 to two. Prime Minister Scott Morrison has announced tighter .... >>