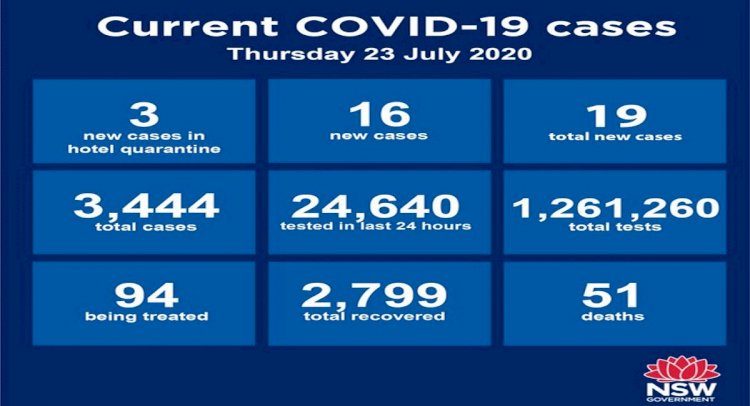 Nineteen new cases of COVID-19 were diagnosed in the 24 hours to 8.00pm last night bringing the total number of cases in NSW to 3,444 according to the latest media release by NSW Health Department.

There were 24,640 tests carried out in the 24-hour reporting period, compared with 18,465 tests in the previous 24 hours. Over the past week we have seen record numbers of people being tested, with over 27,000 on one day, which is more than a 50 percent increase on the previous week.

NSW Health Minister Brad Hazzard has warned people not to get complacent, maintain strict social distancing and get tested with even the slightest symptoms.

Mr Hazzard confirmed one of the new cases was a toddler who attended the Goodstart Early learning centre in Anna Bay, which was closed today for contact tracing and cleaning. While another case, he said, was a school aged student who attends Tomaree Public School in Port Stephens.

The other confirmed cases include another three people associated with the Crossroads Hotel cluster in Casula, bringing the total count there to 56.

Another nine cases are linked to the Thai Rock restaurant in Wetherill Park, which now stands at 46 cases in its cluster.

NSW Health also said three cases were still under investigation, while another three were returned travellers in hotel quarantine and a fourth was a south-western Sydney resident self-isolating after arriving in NSW.

Most cases have been linked to known clusters. However community transmission continues, and NSW Health is calling on people across the state to redouble their efforts to stop the virus spreading.

“Everyone needs to be aware that there has been transmission in venues such as hotels and restaurants, gyms and social gatherings and therefore they should exercise particular caution in those situations.

While it is not a legal requirement, it would be preferable and safer for the time being to avoid all non-essential travel, and not host or attend gatherings of more than 10 people at home (not withstanding that the legal limit is 20 people). Everyone should observe social distancing and hygiene measures and consider wearing a face mask in situations where social distancing is not possible” stated in NSW health media release

The Sri Lankan government has banned all passenger...

The Sri Lankan Government has suspended all inbound passenger flights and passenger ships as a measure to prevent entry of COVID-19 virus in .... >>

The coronavirus  may  be killed by sunlight in a matter of minutes, according to a study carried out by the Department of Homeland .... >>

More than 2000 passengers who left cruise ship in Sydney...

Covid-19 Risks not over in Sri Lanka – Dr. Anil Jasinghe