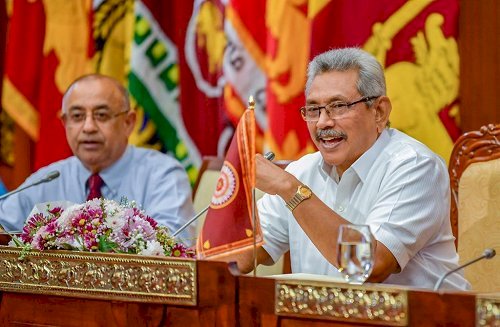 Sri Lankan government has requested  its 1.5 million state sector  employees to donate their May salary to the government to reduce the budget deficit and boost the economy reeling from the weeks-long lockdown due to coronavirus pandemic.

“The government requires at least Rs 100 billion to pay the salaries and allowances of state servants,” President’s Secretary P.B. Jayasundara said in a letter to all state bodies.

He noted that the country’s budget deficit could be reduced if state servants donate their salaries, or if the treasury issues a directive to that effect.

“It will also relieve the pressure faced by the country’s debt management process.”

The island nation was struggling to recover from last year’s Easter Sunday bombings that killed 279 people and devastated the lucrative tourism industry when the virus hit earlier this year.

The government imposed a nationwide lockdown from March 20, closing all industries, transport and shops apart from some that deliver essential supplies such as food and medicine.

In an appeal sent to government departments, Secretary to the President P.B. Jayasundara called on all public sector workers -- including members of the armed forces and the police -- to forego their salary in the name of “social responsibility.”

“In the past month you could not travel, go shopping. A lot of spending was curtailed,” Jayasundara said in the letter, seen by AFP.

“While seeking loans and aid from other countries, we must also demonstrate our internal strength... Consider it (the donation) as your social responsibility at this time of crisis.”

Jayasundara said the donations would help the government “drastically narrow the budget deficit” and “manage our national debt” by saving some 100 billion rupees ($525 million).

He added that he was donating his May pay.

Sri Lanka, which is facing an economic crisis, has to settle at least 4.8 billion US dollars in foreign debt for 2020.

Prime Minister Mahinda Rajapaksa said earlier this week that Sri Lanka had not received any international financial aid to combat the virus.

He added that allegations that his government had previously misused foreign aid were “baseless”.

There have been more than 800 positive virus cases and nine deaths on the island, according to government figures.

The lockdown, which has been extended twice, is due to be lifted on Monday.

Economic growth slowed to 2.3 percent last year compared to an expansion of 3.3 percent in 2018

COVID-19: We Need A Vaccine for The Mind

Greens Senator Mehreen Faruqi has written to the Federal Government to urge them to immediately extend income support to international stude .... >>

Legendary playback singer SP Balasubrahmanyam passed away on September 25 at the age of 74. He was in hospital for nearly two months after b .... >>

Citrus Waskaduwa to be used as a Quarantine Center - Dilith...

Notice for all Sri Lankan Nationals in Australia regarding...