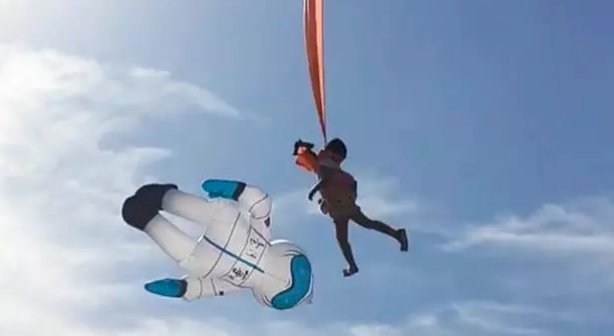 A three-year-old girl in Taiwan has been caught up in the strings of a kite and lifted high into the air in front of horrified onlookers, before being rescued unharmed. The unidentified girl was taking part in a kite festival on Sunday in the seaside town of Nanliao, near Hsinchu City, when she became entangled in a giant, long-tailed orange kite and was hoisted off the ground by several metres.

The 2020 International Kite Festival commenced over the weekend in Nanliao, a seaside town located in the northeastern region of Hsinchu. The area is well-known for its high winds, making it an ideal spot for kiting, and over a dozen professional fliers had come to the event to put on shows and celebrate the festival’s fourth anniversary, according to Taiwan News.

At some point on Sunday afternoon, a toddler’s stomach became entangled in the end of a giant-long-tailed kite just moments before a sudden gust of wind plucked it up into the sky. Footage from the event captured the distressing incident, as the young girl is flung wildly around by the airborne kite for more than 30 seconds. Onlookers scream and yell until, eventually, the kite falls low enough for a group of people to catch her.

The toddler suffered mild scratches to her face and neck, but was otherwise unharmed. Event staffers immediately took her to hospital, alongside her mother, and shortly thereafter the Hsinchu City government called off the entire event.

The Peradeniya University Alumni Association of New South Wales, Australia has donated Rs.1.5 million to the COVID-19 Healthcare and Social .... >>

The Parliamentary Group of the ruling party, the Sri Lanka Podujana Peramuna (SLPP), today approved a proposal to ban cattle slaughter in Sr .... >>

Victoria recorded its lowest new case total in three weeks this morning.  After a spike in cases yesterday, Victoria has recorded a big .... >>

Mahamevnawa Buddhist Monastery in Sydney just completed its dining hall with the support of its devotees. Having a spacious dining hall has .... >>

Post-coronavirus, 'normal' travel may not resume...

Overnight, much of the world went from over-tourism to no tourism. Since then, locals have seen how their lives have improved without those .... >>

Public gatherings limited to two people in Australia to...