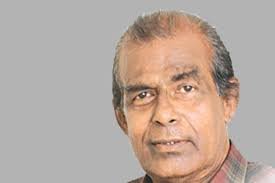 A veteran Sri Lankan actor and stunt director Alexander Fernando passed away on Wednesday (29). He was 80 at the time of his demise.

He had been receiving treatment at Colombo National Hospital when he passed away.

He was admitted to the Ragama Teaching Hospital a few days ago due to a sudden heart attack and was later transferred to the Colombo National Hospital.

Being a national wrestling champion, he has represented Sri Lanka at the Commonwealth Games in 1962 and was qualified for the 1964 Olympic Games in Tokyo. Fernando also took part in Asian Games in 1966.

Alexander Fernando has acted in about 100 films during a period of close to 50 years.

Country music icon Kenny Rogers has died. He was 81. The family said it was planning a small private service at this time "out of co .... >>

Vijay Sethupathi will soon be seen in the biopic of Sri Lankan cricketer Muttiah Muralitharan. The film is being produced by Dar Motion Pict .... >>

Bollywood actor Rishi Kapoor’s funeral rites were held in Mumbai in the presence of his immediate family members and close friends tod .... >>