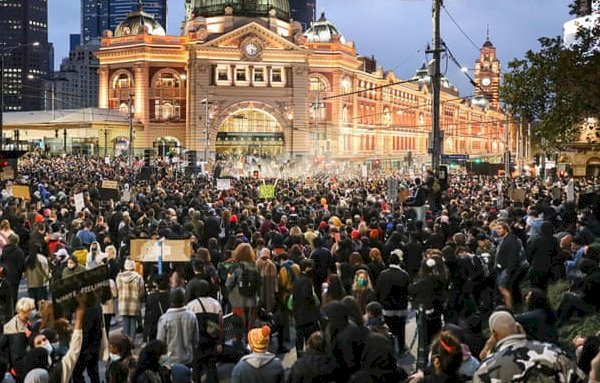 Thousands of people marched through Australian cities and towns for Black Lives Matter protests on Saturday, defying an attempt from the police to ban Sydney demonstration through the courts and despite pleas from the prime minister and state leaders for people to stay home.

In the most dramatic turn of events, a massive crowd in Sydney learned just as they were gathering outside the city’s Town Hall that the New South Wales court of appeal had overturned  a court decision handed down late on Friday.

At least 20,000 attended the Sydney march which passed off peacefully.

Protesters were chanting "I can't breathe", the words mouthed by both Mr Floyd and David Dungay Jr ,  an Indigenous man who died in Long Bay jail hospital in 2015.

The demonstrations were predominantly peaceful and by nightfall, authorities re-opened most of the roads in the CBD.

However there were some ugly scenes when police officers used pepper spray on protesters who had flowed into Central station after the rally finished.

Some protestors were visibly hurt by the spray, with eyes streaming, and there were accusations that the remaining crowd had been forced together into a small space in the station and unable to move.

Although the protests were sparked after the death of unarmed African American man George Floyd, public outrage was further stoked when a Sydney police officer was caught on camera slamming and Indigenous teenager face-first into the ground this week.

In Melbourne, Brisbane, Adelaide, and smaller cities and towns across the country mask-clad protesters gathered, drawing attention to racial profiling, police brutality and more than 400 indigenous people who have died in police custodey since a royal commission into the problem was held in 1991.

Although protesters sought to keep at least 1.5 metres between them, many struggled to do so closer to the stage. In Melbourne, where the crowd stretched across many blocks, some also began to dance when the African Australian musician Sampa the Great took to the stage to perform two songs.

The protests went ahead despite warnings from Australia’s chief medical officer, Brendan Murphy, that large gatherings risked ruining the progress Australia had made in significantly reducing the number of active coronavirus cases.

New South Wales will only start relaxing lockdown restrictions from Friday, but does not plan to implement all "step one" measures .... >>

The Election Commission of Sri Lanka has fixed a date to hold the General Election 2020, stated the Media Unit of the Commission. Accordi .... >>

Sri Lanka was announced as the host country for the prestigious...