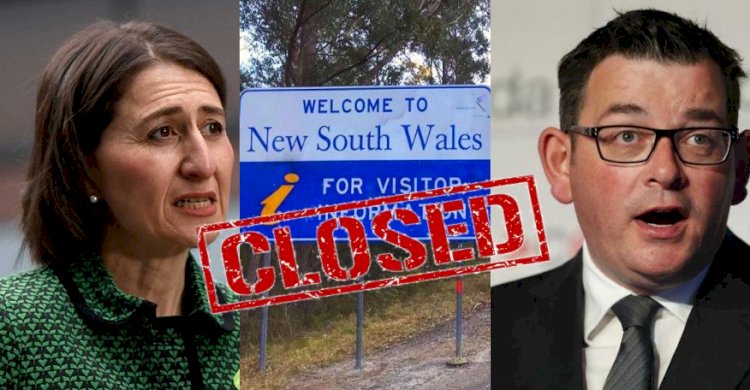 Victorian Premier Daniel Andrews and Chief Health Officer Brett Sutton wrapped up their press conference this morning and confirmed that the NSW-Victoria border will close at 11.59pm on Tuesday. Decision was made following talks between both states' premiers and the Prime Minister this morning.

NSW Premire Gladys Berejiklian says there has been no other choice but to close the border, as community transmission spreads.

“What is happening in Victoria is very different which is why we have had to take this necessary step.

We wouldn’t have taken this step, unless we absolutely had to and, in essence, it also takes pressure off Victorian resources because our police and our health officials are able to do their jobs on this side of the border and allow the Victorian officials, whether it is their health officials or their police to focus on getting our control of the virus.

I appreciate that the Victorian Premier has already spoken to the media and to he would have outlined the fact the community spread is increasing throughout Melbourne and we are also concerned, based on the health advice I received this morning, that there is no guarantee that some of the people in regional Victoria may have not been - what they call seeding.” Said Premire Gladys Berejiklian

Victoria has recorded 127 new cases in the latest 24-hour reporting period, the state's highest ever daily case increase. Thirty-four were linked to known outbreaks, 40 were discovered through routine testing and 53 are being investigated.

A man in his 90s died from the deadly virus in the past 24 hours, while 34 cases were linked to known outbreaks, 40 to routine testing and 53 remain under investigation.

Cases of infections in Melbourne’s locked down public housing towers have doubled with the tally at 53, a total of 26 more than yesterday.

Victoran Premiere  said that  “permit-based” system would determine who is allowed to cross the border, with the NSW to announce later today the logistics about the operation.

It will be enforced on the NSW side of the border. Victorians will require a permit to enter NSW and there will be special permissions for border communities such as Albury-Wodonga.

NSW is currently conducting 2000 tests a day for Victoria, after the state recorded more than 50,000 tests over the weekend. This number may be increased, with Mr Andrews saying he is grateful for all of the interstate support he has received.

Mr Andrews said he was in discussions with the Prime Minister over further ADF support.

According to a report publlished by the CMA Australia, Sri Lanka and Australia among the top 10 countries managed Covid-19 crisis .... >>

Tap and go payment limit increased to $200 to stop the...

One Year on, Easter Bombing in Sri Lanka Continues to Puzzle

No plans to delay the further easing of restrictions in...