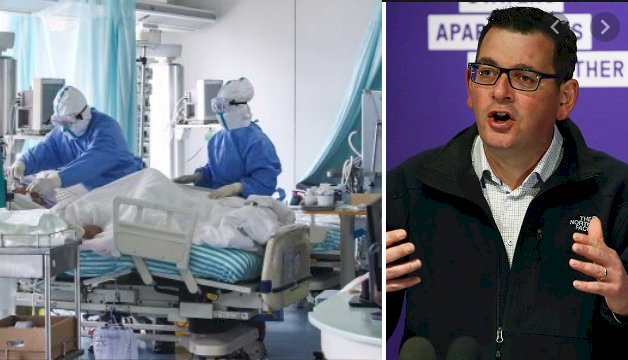 Victoria has recorded  41 fatalities and 73 new cases of coronavirus on Monday.

It is the highest number of deaths in a single day in Victoria with the previous record of 25 deaths recorded on August 17.

The death toll for the state now stands at 565 after it reached the grim milestone of 500 deaths on Saturday.

It comes as Premier Daniel Andrews announced Melburnians will need to wait another week for details on a “roadmap” out of stage four lockdown.

Mr Andrews told reporters on Monday morning he will make the much-anticipated announcement on September 6.

Melburnians are subject to another fortnight of strict stage four restrictions including an 8pm to 5am curfew and Mr Andrews said the benefits from the first four weeks are starting to show.

The roadmap will be released on Sunday and is being finalised with community groups, businesses and unions as well as extensive modelling by health experts.

'We will announce the roadmap to ease the restrictions we have all been living under,' he said.

'It is too early today to settle that roadmap and to lock that in as it were.'

“Another week‘s data is critically important to make sure that the strategy continues to work and for us to have a better sense of how long it will take to drive these numbers down to very, very low numbers so that they can be contained uncontrolled without the need to put restrictions back on over not just weeks and months, but over a longer period, finding that COVID-19 normal and looking at in for many months.”

Monday's number includes 33 deaths in the weeks leading up to August 27, but were only reported to Victoria Health by aged care facilities on Sunday.

This means 8 people died in the 24 hours to Monday. The previous highest daily toll was 25 on August 17.

The spike of fatalities come with just 73 new cases of COVID-19 after Victoria recorded 114 new cases on Sunday and 11 deaths.

After multiple delays, Sri Lanka is now planning on reopening its borders for tourism starting in the last week of 2020. If travelers follow .... >>

More COVID-19 restrictions will be eased in NSW...

More COV ID-19 restrictions will be eased in NSW from 1st of June (Monday) with more people allowed in clubs, religious places and at weddin .... >>

China’s education ministry has warned Chinese students to reconsider plans to study in Australia, amid escalating tensions between Bei .... >>

Do not interact with Melbourne citizens - NSW Premier