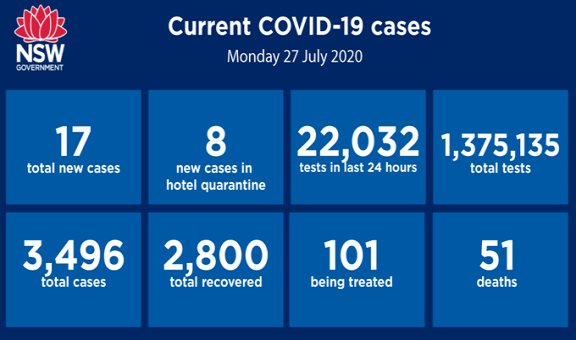 NSW has recorded 17 new cases of coronavirus overnight, eight of those in hotel quarantine and four are linked to a funerals cluster in Sydney's south-west.

There are three new infections linked to the Thai Rock cluster in Wetherill Park.

NSW Health issued a warning that anyone who attended the Thai Rock restaurant at Potts Point between Wednesday, July 15 and Saturday, July 25 needs to be immediately tested. It says they must also self-isolate for 14 days since they were last there, after a diner who visited the restaurant on Friday, July 17 tested positive last week.

Both restaurants are under the same management and health officials are looking into whether staff were working across two locations.

There are now nine cases relating to church and funeral services between July 16 and 19 in south-west Sydney which were reported on Saturday.

A couple who tested positive after the Bankstown funeral gatherings are known to have dined at two restaurants.

Anyone who visited the Tan Viet Noodle House Cabramatta (AKA Crispy Chicken Noodle House) between 1:00pm and 2:00pm on Wednesday, July 22, or An Restaurant Bankstown between 9:00am and 11:00am on Thursday, July 23 should watch for symptoms and get tested if they appear.

"NSW given the circumstances is holding the line and doing okay, but we are still on high alert," Premier Gladys Berejiklian said today.

"This is a critical time over the next three to four weeks and if we can all play our part in changing behaviours and reducing interactions it will help us control the spread of COVID-19," she said.

NSW Health has issued a warning to the thousands of Australians waiting on COVID-19 test results after some residents were told they had to .... >>

21st March Another 51 people in Victoria have tested positive for coronavirus overnight and the state's total number of coronavirus c .... >>

Curfew extended in Colombo amid spike in fresh...

The ongoing curfew in Colombo, Gampaha, Kalutara and Puttalam Districts will remain in force until 5.00am on Monday (27), President’s .... >>

Foreign government behind a major Cyber attack on Australia.

Some restrictions could be relaxed in NSW

Sri Lanka debt tumbled from best to worst in Asia due to...